Alternatives to the punitive

I used to regularly contribute to the Guardian's Comment is Free and did so again this week in a thread entitled: At least Bob Ainsworth dares to speak about drugs

"What do these young people have to guide them in life? What have faux liberals such as John Moore put in place of what he and his fellow travellers have destroyed? Perhaps one of you can answer that simple question?"

I regret I have destroyed very little. We retain a punitive criminal justice system that fails to address the crimes of the powerful (which cause the greatest harms) and focus instead on the powerless and most vulnerable in our society. Criminal justice interventions create more crime than they solve. Politicians follow policies they know will increase the number of victims and then (often successfully) seduce those very victims with tough words and promises of more of the same.

On a personal level what have I tried to create as alternatives?

Well I spent 20 years working directly with men and women leaving prison and forensic mental health services, managing and developing services that enabled them to escape the destructive grip of the penal syste. Services that treated them with respect, helped them access community resources, find housing, get jobs, sort out their money, become integrated into our communities and live ok lives.

I know that there are a couple of hundred women and men living ordinary lives away from prison and contact with the police as a result of that work. They benefited from our efforts to create opportunities for them to become socially included AND as a direct result there are at a guess many thousands of other members of our community who as a result were never victimised.

Its easy to condemn, demand more violence and more pain, but if you want to make things better you have to admit that what works to stop the anti social behaviour of the vast majority of people in our criminal justice system is community based services that facilitate intergration, inclusion and which respects them as fellow members of our society.

Posted by John Moore at 17:28 No comments: Links to this post 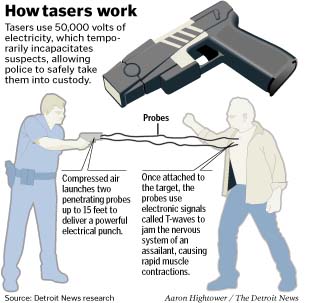 Spotted this press release from the Met

Appeal re missing MPS Taser
Police are appealing for the assistance of the public in finding a Taser which has fallen from a police vehicle in Lambeth.

An officer from the MPS CO19 Firearms Unit had attended a briefing at a firearms base in Norfolk Row, Lambeth on Tuesday, 7 December, between 0700hrs and 0830hrs.

During the course of preparing the vehicle for operation after the briefing, the officer placed a Taser on the roof of a marked police vehicle. He then drove away from the base with the Taser still on the roof.

At around 1000hrs it was noticed that the Taser was missing. Despite extensive searches, we have been unable to recover the Taser and four cartridges which were with it.

Officers believe the Taser would have fallen from the vehicle in the Norfolk Row area of Lambeth, and almost certainly before reaching Vauxhall Cross where the vehicle stopped for fuel.

We are appealing for anyone with information as to the Taser's whereabouts to call the Metropolitan Police on 0300 123 1212.

The Taser broadly resembles a handgun in shape, but is constructed of bright yellow plastic.

We would ask anyone in possession of the Taser not to handle it, but to call police immediately.

An internal investigation is underway. The Directorate of Professional Standards has been informed. The officer has been removed from operational firearms duty.

No image available overnight.
Posted by John Moore at 22:23 No comments: Links to this post

I was reading up on yesterday's student protests when I noticed the advert the Guardian was running on that page. 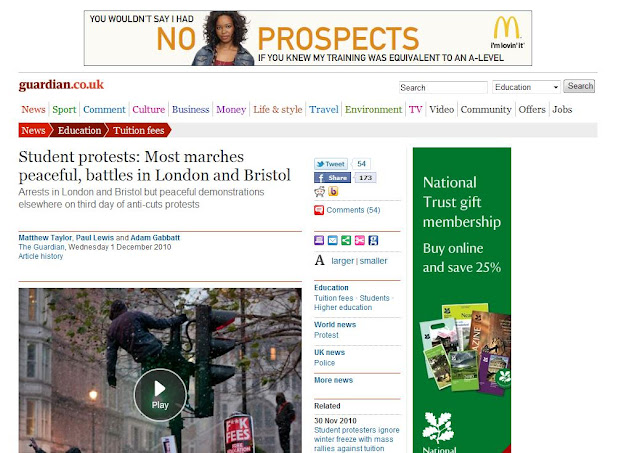 Posted by John Moore at 08:33 No comments: Links to this post

Last month saw the hundredth anniversary of the Russian Novelist Leo Tolstoy.  To celebrate a couple of quotes from his last novel Redemption

And he ran over in his mind the people he knew who were suffering from the activity of the various institutions for the re-establishment of justice, the support of religion and the education of the masses … and he saw with remarkable clarity that all these people had been arrested, locked up or exiled, not in the least because they had transgressed against justice or committed lawless acts but merely because they were an obstacle hindering the officials and the rich from enjoying the wealth they were busy amassing from the people.’ (pp 386-387)


‘there was no man living who was guiltless and therefore able to punish or reform.’ (p. 565)

Posted by John Moore at 08:25 No comments: Links to this post