Boy George, Malcolm McLaren and the dangers of asbestos 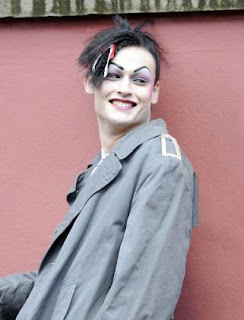 As part of its Eighties Season BBC Two recently showed the excellent Worried About The Boy, a drama about Boy George's life before Culture Club. It available on the BBC iplayer until Sunday and well worth watching - even George likes it!  Douglas Booth  who plays George is perfect in the role.

I also enjoyed Mark Gatiss's portrayal of Malcolm McLaren who died recently. Shortly after his death last month I came across an article by Jeremy Laurance in the Indie which cast light on McLaren's death.


But the image I can't get out of my mind is of the young McLaren, aged twenty-something, full of flair and ambition, smashing through the ceiling of the Sex boutique in the Kings Road he was setting up with Vivienne Westwood. He wanted to create the impression a bomb had hit it. Instead, he released a bomb that hit him.


Life is fragile, we know. You can step off the pavement and be wiped out in a second. A single mistake is all it takes. But this was a case of stepping off a cliff a million miles high – and taking 40 years to hit bottom.

From the moment he swung the sledgehammer, McLaren was doomed. His partner, Young Kim, said it was exposure to asbestos dust in the ceiling of the shop that caused the mesothelioma, cancer of the lining of the lung, that ultimately killed him. More than nine out of 10 cases of mesothelioma are caused by asbestos, so Kim is probably right. It is not like smoking, which takes years of cumulative exposure to do the damage. Even a few lungfuls of asbestos can be fatal. Kim said the shop was "the only place Malcolm ever really spent any serious length of time".

To understand the scale of mesothelioma lets compare it with murder. The number of homicides (murders and manslaughters and infanticides) in England and Wales in 2008/9 was 648 yet in 2008 killed over three times as many - 2,154 deaths. But whilst our newspapers are full of the dangers of crime and the risks we face of being murdered they are silent on mesothelioma and other causes of death that can largely be traced back to the workforce.  As Laurance observes


Deaths from mesothelioma have been rising for decades and are only now peaking – a legacy of our dependence on asbestos 30 years ago. The last press conference I attended on the subject was in 2003. It was, as I reported at the time, a sad affair. There were more experts on the panel – five – than journalists in the audience (three, including me).